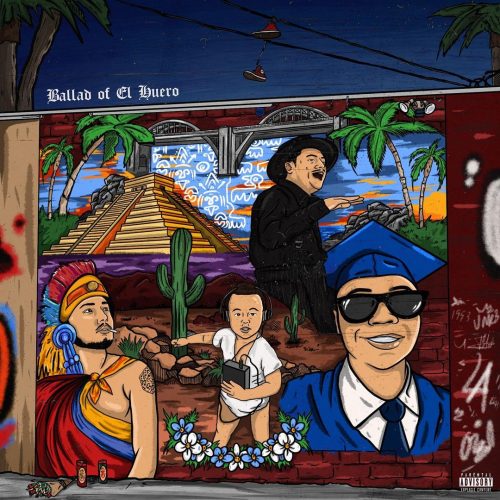 Viva Mescal is an underground titan from Los Angles. Recently he just released a brand new album titled “Ballad Of El Huero”. With a score entirely crafted by super producer Nug Life, can this scorching hot MC create his best work to date?

With complex and thoughtful songwriting and a presence like no other, Viva Mescal proves he’s here to stay in this rap game. As a rapper, he’s so gifted, and the way he’s able to keep his flow so gritty while rapping about very thoughtful topics is a skill, not many possess. Viva raps about his struggles; he questions the world, and adding all of these dynamics to his verses makes him a relatable character that listeners only want to hear more of. Out of all his struggles, a theme heavily addressed comes from Mescal’s struggle to blend in with a group. They say “he’s not Mexican,” yet he’s also not “American enough”. Having this struggle to find his place in the world adds even more depth to the LA rapper and truly makes you feel for him and question your morals. While many rappers have struggles and attempt to rap about them, Viva Mescal is so good because, on top of having relatable issues to the average person, he’s able to turn them into well-layered and properly addressed messages for thousands to unravel and empower themselves with.

Behind the boards, NugLife creates one of the most dynamic and well-arranged scores I’ve heard in a while. A vibrant, jazzy feel, distorted samples, and a lot of soul equate this record with a very distinct feel. The way these amazing scores layer the background of Viva’s passionate vocals are the best part. Whether it’s creating an odd contrast or adding to his pain, each track does a masterful job in its execution. Overall the vibrancy and light in this soundtrack is truly moving and redefines what beauty in hip hop really is.

Walking away from “Ballad Of El Huero,” and I’m honestly blown away by how good this record was. Covering themes such as exclusion and misplacement while making the experience so relatable through some of the most profound writing I’ve heard all year, this is really a gem to take in. Going forward, I’m sure Viva Mescal will only get better, and at this rate, he can become a real legend!