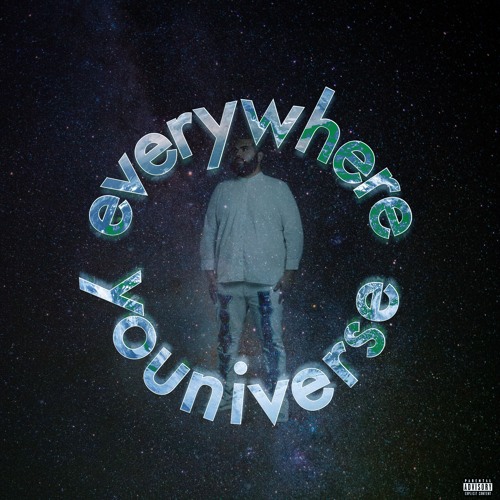 is an up-and-coming underground hip-hop artist. This year, he released a new album titled “YOUNIVERSE”. With a chance at rising to stardom, will everywhere seize the opportunity?

Through a mere eight tracks, everywhere creates an enjoyable experience that maps out his strengths and covers his weaknesses. His charisma echoes throughout the LP, and his subject matter coincides with this. Mostly he’s talking about pretty basic topics such as how good his music is, the chasing of his dreams, and braggadocios subjects in general, but the enjoyable coating over these somewhat lifeless words keeps things interesting enough to keep the listener captivated. Moments like “In Due Time” and “Respect” especially stood out due to the slew of memorable one-liners these two possessed. While his technical ability isn’t as proficient as many other underground MCs, everywhere garners his power through his clever writing and dynamic vocals. The only real issue I found within the cuts was the occasional flat vocals which killed the momentum when present. Overall, I still think there’s some fine-tuning to be done if everywhere wants to be a star, but this is formidable at the least.

Behind the boards, there’s a solid soundscape accompanying each work of everywhere. The beats tend to play it pretty safe, but this is far from a bad thing as where’s voice is usually the main instrument throughout each track. The definite instrumental standout was “I Love You,” as it features an angelic and soul-touching piano infused outro to tail off one of the most emotional cuts on the entire record. The instrumentals “The City Is Mine” and “Cry Sis” also stood out heavily due to how well they matched the vocals of everywhere. Is the score here anything mindboggling? No, but is it solid? For sure.

In conclusion, YOUNIVERSE is a solid project, but it doesn’t blow me out of the water in any regard. Everywhere has some nice qualities, but he lacks a true great skillset and definitely needs to find a way to stick out more. Going forward, I hope everywhere can use these criticisms to better himself and create something truly life-changing.