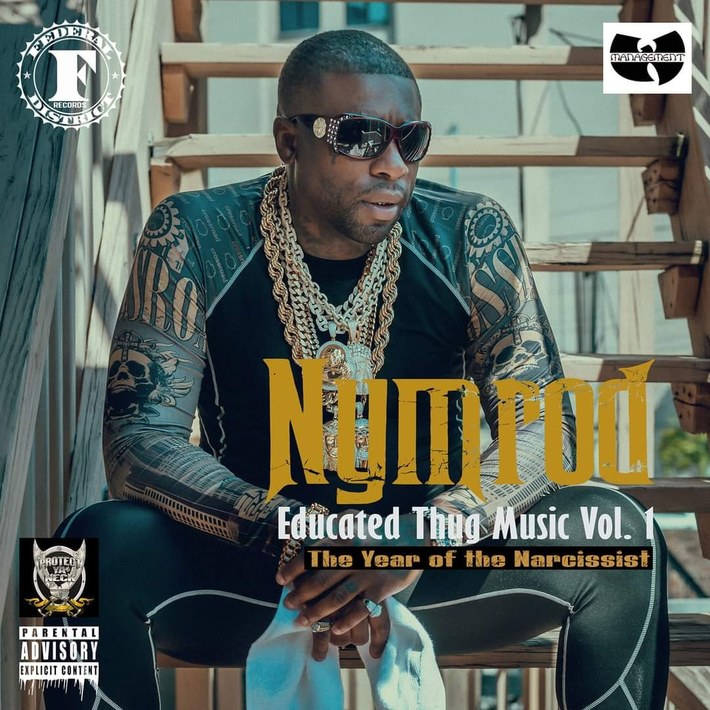 Corry Paris Stokes — better known as Nymrod — recently released his long-awaited debut album, “Educated Thug Music Vol. 1; The Year of The Narcissist.”  The veteran rapper and songwriter shows off his musical form of vocal delivery that incorporates “rhyme, rhythmic speech and street vernacular in this 12-track album. Featuring musicians like Haddy Racks, Royal Flush and Manifest — just to name a few — it’s no surprise the album has so many long awaited hits.

Nymrod has made quite the name for himself over the years, after being released from prison where he meet and mentored under Max B. Shortly after his release Nymrod connected with Dipset members Jim Jones and Cam’ron where he would be featured in Jim Jones “Ballin” music video. During his career he has collaborated with Redman, The Weekend, Melo, The Heatmakerz, H.E.R., PMD of EPMD, Spliff Star, Junior Reid, Tyga, VADO & Fred The Godson. NYMROD has graced some of the countries biggest stages performing at the legendary NYC venue SOB’s countless times alongside Fred the Godson, Rah Digga, The Lox, Onyx and even headlined at 2018’s Hot 97’s Summer Jam, DJ Drewski’s Long Island Artist Showcase as well as Columbus Ohio’s The Rock Festival with iconic rock band Evanessence. A good portion of Nymrod's fan base and supporters comes from his performances. Nymrod has performed at venues up and down the east coast, some of the west coast and has even toured in Tokyo. He takes pride in the ability to work a crowd and command the stage. When Nymrod is on stage you cannot help but to take notice. He decided to have his Album release party for “Educated Thug Music Vol. 1; The Year Of The Narcissist” in Miami, Florida during the “Drive Your Dreams Car show” with DJ Envy. This is probably what contributed to “Educated Thug Music Vol. 1; The year of the Narcissist” day one debut of over 45k streams, which for an underground independent artist is like going Gold.

Nymrod has since released several multiple chart-topping singles like “LIFESTYLES” “THE KING AND I” and “TIME,” — the latter featuring rappers Haddy Racks and Royal Flush. This album has promised not to let his haters down; he has given every one of them more and more reason to hate even harder.

Opening with the title track, “DON’T F*CK WITH ME” tells the story of how many rappers aren’t who their bars suggest them to be and unrequited feelings. There’s organized upbeat chaos to the song, matching the lyrical and visual context of the song. The track ends with a very strong message to all those that feel they can F*ck with him.

“KING AND I” breaks down the fake interactions Nymrod has experienced since his starting his record label “Federal District Records” and his career blowing up. Whether fake friends, artist contracts he’s had to cancel, or cancelling women whom couldn’t comprehend being more than a one night stand. He let’s every one know he doesn’t need them and not to push his buttons raping, “Ni**as wanna talk sh*t, talk sh*t, till the eagle in they mouth, in they mouth / Then they wanna talk it, talk it and try to work it out / Don’t push my buttons.”

Featuring rappers and songwriters Haddy Racks and Royal Flush “TIME” has a catchy hook and all three artists go back to back with sick verses that make you nod your head from the beat drop. Nymrod knows his worth with this song as he raps, “ I’d advice yall to breath easy / Ni**as know Nym, I don’t breath easy / if there’s a problem young man step to the D and see me / What yall Ni**as thought I was born greasy, I’ll take your cash money dog and leave ya a**es weezy,” Did we mention the bar game in this album.

In the music video, Nymrod, Haddy Racks and Royal Flush take turns clearly letting the streets know they are not to be tested. Loyalty is more than a tattoo to some. You just have to find a team worthy of you putting it all on the line.

Nymrod shows off his lyrical ability and range in genre with “SEASONS” featuring Enjo, which sounds more Pop-RnB compared to the other tracks on “Educated Thug Music Vol. 1.” It also shows off his range and ability, to please the ladies in his calmer verses. You can hear the emotion in his voice in this track when he raps, “ Could you tell me where we went wrong, it’s like I’m caught up in this love song / I can’t concentrate or breath with my heart gone, you was my female doctor Hawthorne, now I gotta stretch it out, Armstrong / I understand your pain, I understand your gripes, man F*uck that nigga just come spend the night.”

Sticking with the hip-hop genre “MR NOBODY” is a slow hip-hop ballad about being stuck in a place where Nymrod talks about the rumors he’s heard about himself throughout his career. He can’t understand how the people he fed could call him bro, lover and friend one minute but then squint their eyes, curse him and call him a nobody with the same mouth that once whispered I Love You’s. Grammy award winner, Newo The Kid, showcases these conflicting emotions with an intense production.

Closing out the album “THE EDUCATION,” a track consisting mainly of base guitars, heavy drums and some strings along with other complimenting sounds. Nymrod reflects on how his experiences in the music industry and life have shaped him — both positively and negatively. He opens the song, “It’s like duck, duck, goose, hut one, hut two, this ain’t womper room when I’m aiming at your roof, this is what God looks like when God looks right / I’m just giving you the future in hindsight….” He is giving a clear lesson and class is in session.

The tracks I’ve highlighted show off the range of the album, but you have to listen to the entire album. I did straight through, no skips. I am looking forward to Education Thug Music Vol. 2; The Education. Nymrod has a bright future ahead in his music career.

Listen to ‘Educated Thug Music Vol.1; The Year Of The Narcissist” on Spotify here.