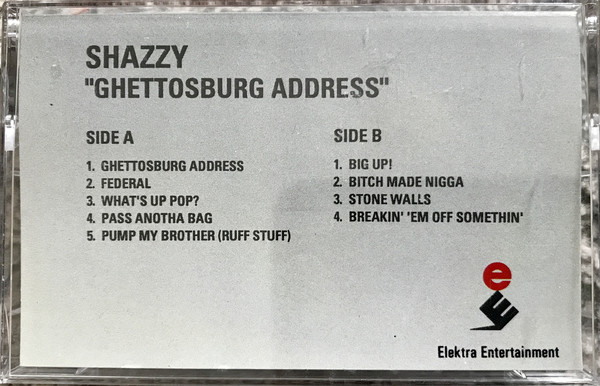 Shazzy's second album entitled "Ghettosburg Address" originally recorded and shelved by Elektra in 1994 is definitely a project I'd like to see coming out on vinyl nowadays, along with some unreleased demos from '93-'94 if some exist somewhere... The album contains tracks produced by the legendary Pete Rock, Rockwilder, Da Funkey Hoodz, CMT & Ski.

If you don't know Sherry Raquel Marsh a.k.a Shazzy and need a quick recap about her discography, you need to know that this Queens-based female emcee was signed to Elektra in the late 80s/early 90s and dropped two singles and her debut album "Attitude: A Hip-Hop Rapsody" in 1990. It was fully produced by Stimulated Dummies a.k.a SD50's, the collective of beatmakers comprised of Dante Ross, John Gamble (RIP) & Geeby Dajani (RIP). 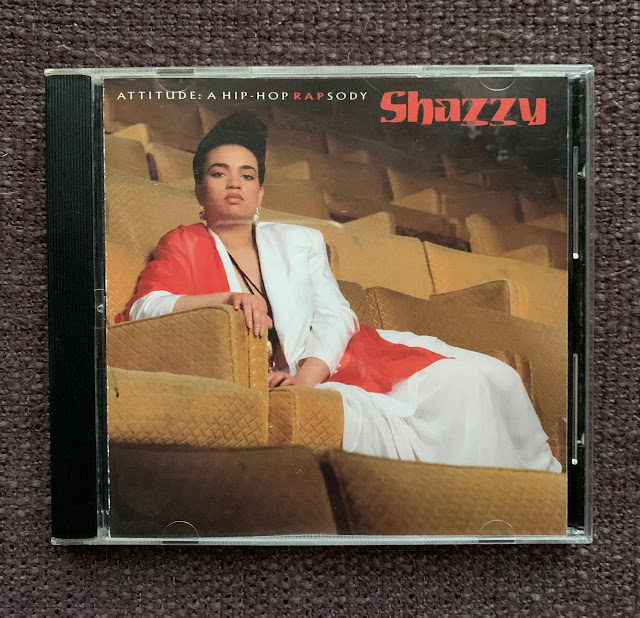 "Rap has its own laws of action and reaction. Unlike most pop, rap records answer one another, naming names and hurling praise, insults or rebuttals. Until recently, rapping was almost exclusively a men's club, but a wave of women rappers appeared in the late 1980's and is gathering force. The first group - Queen Latifah, M. C. Lyte, Roxanne Shante - generally took the high road, ignoring the violent talk and blunt, unexamined sexism of most male rappers. But in the last year, the 2 Live Crew have gained wide notoriety for their lewd raps, while gangster rap has hitched its tales of urban violence to an increasingly vicious misogyny; when Ice-T describes himself as ''the bitch killer'' to glorify his outlaw persona, someone has to talk back. Female rappers are still greatly outnumbered, but they're beginning to speak up directly against macho bluster, and to remind the rap audience that women aren't exclusively ''bitches,'' ''hoes'' (whores) or sex-crazed ''freaks,'' as too many male rappers pretend.

As a rule, the new female rappers create personas that are more level-headed, more compassionate and less heavily armed than their male colleagues'. Boasting comes with the territory, but women speak less about mowing down opponents and more about their own skills. They're aggressive but don't pretend to be invulnerable or infallible, and when they discuss violence, they also pay attention to the mopping up afterward. Most of them have doubts about promiscuity. But female rappers don't suggest any feminist utopia; in their raps, sisterhood is competitive - for male affections and for dominance as rappers - and mercy is doled out sparingly and selectively.

The most ambitious and substantial new female rap album is Shazzy's ''Attitude: A Hip-Hop Rapsody'' (Elektra 60937; all three formats). Sherry Raquel Marsh, a k a Shazzy, is a husky-voiced woman from Queens who sends rhymes dodging and ricocheting through the crisp, layered funk riffs dispensed by D. J. Vanguard. Like other rappers, Shazzy has multiple agendas. She extols her own prowess, pays tribute to the soul and funk recycled in her backup tracks, shows off her quick tongue, free associates and exhorts listeners to dance. But she also moves into the Afrocentric political territory of Public Enemy and Boogie Down Productions with ''Black Is a Nation'' and ''Believe It's So,'' a song about racial and sexual discrimination that asserts, ''Nine women out of 10 will tell you hell no/ I ain't livin' like a body with no face/ Identity is set and my mind is a terrible thing to waste.'' As a bonus track on the CD, she moves into reggae dance-hall rapping and insists, ''Equality we demand'' and ''No man control me.''

Shazzy disputes the practice of sex as conquest in ''Heartbreaker,'' in which she confesses to playing games with her lovers, and in ''Giggahoe'' (it rhymes with gigolo), a scathing put-down (set to a jaunty New Orleans piano lick) of an ex-lover who didn't know a good thing when he had it. She tells high-living drug dealers with no future that ''You need a job, kid,'' and in ''The Way It Is,'' she details the collapse of families torn by drugs, shooting and child abuse. Shazzy is always serious, unwilling to drop her guard; the only jokes turn up as snippets between songs. But Shazzy knows the difference between preaching and rapping; she lets the rhythm carry the message, never the other way around. " - courtesy of "The Women Who Talk Back in Rap" - New York Times from October 21, 1990, Section 2, Page 33.

After that Shazzy dropped 2 singles, the first one 3 years later... "Ghettosburg Address" which came out on 12" and on Cassette. The A-side of the wax contains the lead single "Ghettosburg Address" produced by The Funkey Element Of Soul (Lyrics written by C-Money and beats produced by T.Rose) and the B-side contains the excellent "Stone Walls" produced by Da Funkey Hoodz. The second one "Pass Anotha Bag"/ "Pump My Brother (Ruff Stuff)" came out in 1994 and was produced respectively by Pete Rock and Rockwilder. Both 12" are very cheap so grab them asap ! 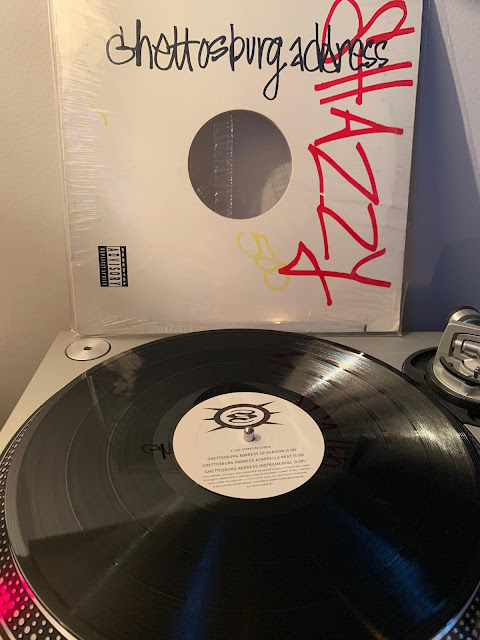 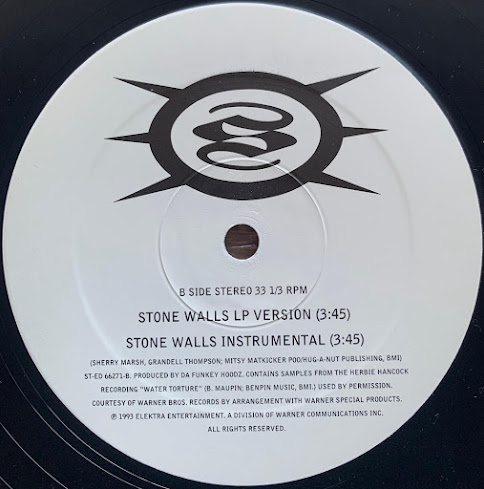 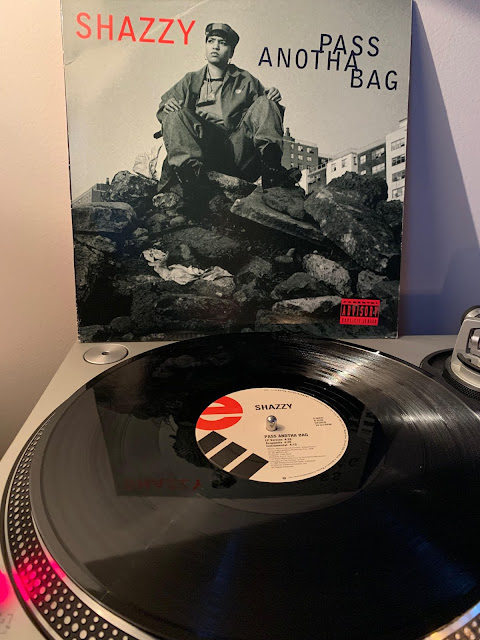 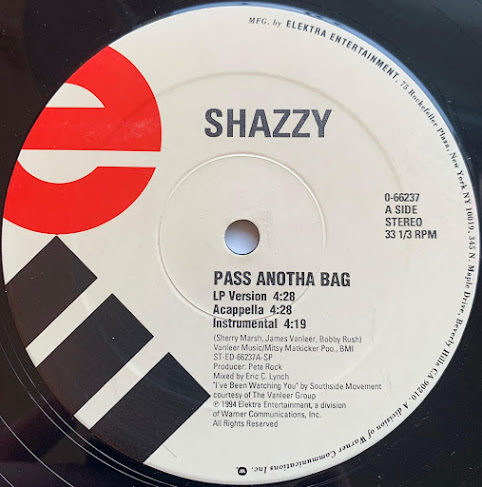 12" - 1994 - Elektra
The album "Ghettosburg Address" which is a 9-track project was scheduled to be released in early 1994 on Elektra Records. A few promo copies were recorded on tape and although the album never saw the light of day it was officially reviewed in Vibe Magazine in March 1994.