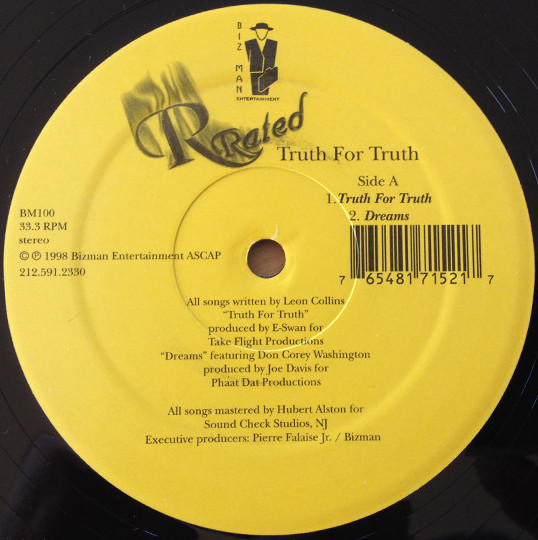 EP - 1998 - Biz Man Ent.
This 12" was released by this emcee from Montclair, New Jersey named R Rated. The wax came out in 1998 on Biz Man Entertainment, a record label managed by Mark (Bizman) Matthews.
4 tracks are pressed on it, "Truth For Truth" produced by E-Swan which is the lead single and the best track of the EP, "Dreams" featuring Don Corey Washington and produced by Joe Davis, "Verbal Tounge" featuring DJ Baby T. and produced by E-Swan, and "Verbal Bonus" featuring O.Brooks a.k.a Omega.
I 've been in contact with R Rated and Pierre Falaise who was one of the executive producers. They gave me more info about the story of this EP and the persons involved in this project.

Pierre Falaise : "R Rated ... We went to High School together. We were a part of the same crew in Montclair, named MAN... Maple Ave Niggas. He connected with Mark (Bizman) Matthews, who worked at the Booga Basement with the Fugees. They were already working on the single "The Bigger Picture" when they contacted me and asked if I wanted to be involved. I liked how the song sounded so I jumped on."

R Rated : " MAN was just a group of friends that grew up on maple ave. We use to hang out and freestyle on Maple and Lexington (maple and lex for short). One day a friend and I got into a freestyle battle with Wyclef and Praz from the Fugees. I did pretty good so they invited me to the studio (the Booga Basement) and that's how I started making music. Mark was the studio manager at the Booga Basement. We started to build from their. Mark taught me a lot about the music business. I credit him for why I’m still relevant at this moment."

Pierre Falaise : "E-Swan was a DJ we went to High school with him. Not that it matters but he is Caucasian and was the coolest on at MHS. He DJ'd all the parties. Joe Davis owned the studio we recorded at in East Orange, NJ, he connected us with Don Corey Washington who did the hook on Dreams. I am actually the cops voice on "Dreams".

I believe Don Corey Washington was a Jersey club head. He had some music out in the past but I don't remember what songs. "

R Rated : " I lost contact with those guys years ago. They helped out a lot, I would like to thank them in this interview."

Pierre Falaise : "O. Brooks a.k.a Omega who features on the track "Verbal Bonus" was also on the Fugees "The Score" album (Family Business). He's a dope MC. I remember we had a beat for this track "verbal Bonus" but the producer wouldn't let us use the beat so we just put it on the record so we just put the vocals so the DJs can just mix it.

Between I think the year was 1998, my girlfriend at the time was pregnant with my son. Das EFX was on fire ! I used to listen to their tape everyday at work while working on this "Truth For Truth" project. I worked at a print shop, I was there all day then we hit the studio at night. We went from here to Kentucky to Ohio to DC with this project. There used to be an indie function in Cincinnati. But I remember going to Cleveland too. We went to all the college radio stations.

For the story ... when we were on our way to Montclair State to get the record played I got pulled over. Omega was talking crazy to the cops so they gave me a ticket... We made it to the college and got the record spun but I had to pay that ticket !!

We were gonna do an album but I think we were working towards the deadline to release something for an event we were trying to be featured in so we put out the EP ... Might've been the festival in Cinci.

After that, R Rated changed his name to Cap Deleon and formed a group called Team Embassador with Baby T who became B-Teezy.

We started a label called Team EMB and made an album titled "System Overload"... more island feel... R Rated from Trinidad. I’m a Haitian decent. B-Teezy is from Jamaica... and way different from R-Rated !!

But we never dropped "The Bigger Picture" ... I don't remember why but hopefully R remembers..."

R Rated : "I changed my name over the years because I started a group/ band called Team Embassador and released an album called "System Overload" and a mixtape series called "the Pirates" and the name Captain Deleon came from that.

We wanted to release "The Bigger Picture" but back then it wasn’t as easy to release a single as it is today. This was before iTunes and Spotify. This was the white label era. We had an issue with the producer at that time, with getting it mixed and mastered in time. Even the song that featured my label mate Omega we didn’t use the beat because the producers were trying to take advantage of me being a new artist. I guess that's just apart of the game. I started producing after that experience. "

"Truth for Truth" EP was released on vinyl and on tape at the time. Some copies are still available for sale on Discogs for those who are still looking for it.

Mad Props to R Rated & Pierre Falaise, thanks for your time !