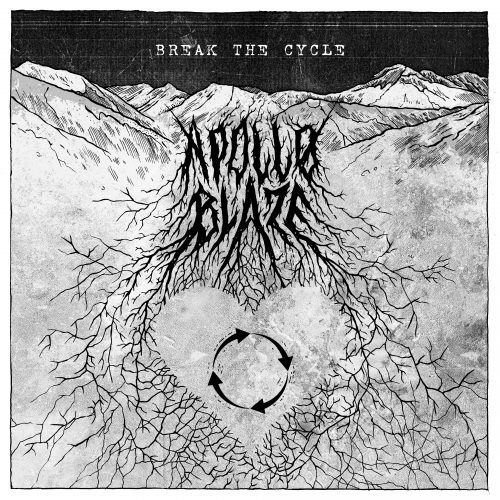 Apollo Blaze from Washington D.C. has just released his newest album titled “Break the Cycle”. This 13 track album is insatiably dark dealing with deep disturbing topics such as sexual assault, the death of a loved one, heartbreak and more. This album is a woeful ode that explores the varying feelings of grief that gets associated with loss. From trauma to triumph, Apollo Blaze seeks to break the cycle of grief and achieve contentment and happiness. This album is the full personification of grief and the demons that come with it.

We start with his first track break the cycle, this track is interesting because we start the album with the resolution to the cycle of being sad. Apollo Blaze knows that in order to break the cycle, he must go through the stages of grief that will help him get there. The concept of the album is interesting because he is not only grieving over one loss, but is mourning the multiple tragedies at once. He is dealing with the deepest sadness that one human can feel. He explores emotion through an experienced lens, lamenting over the death of his mother.

Apollo Blaze weaves through heartbreak and the feeling of not belonging in the opening tracks of this album. “Don’t Belong” demonstrates the feeling of detachment one feels after experiencing trauma and loss. We then move onto “Dark Rose”, a name he has coined for his beloved. The imagery of his beloved is cloaked in black representing sadness and loss. Yet she still encompasses all the beauty of a rose. We then transition in to borrowed time, where he laments on the fickleness of time passing and how it isn’t his to control. It seems that even his mere existence is cause for anxiety and angst. Holidays that are suppose to be filled with joy and warmth are replaced with anger and grief.

At least Apollo Blaze realizes that there is nothing on earth that can get to him at this point because he’s been to hell and back. Whether he’s giving us a first person narrative or sharing someone else’s tale, we all can relate to the struggle and triumph of what is means to lose something or someone you once loved. Join Apollo Blaze on his journey to self discovery in Break the Cycle, available now on all streaming platforms.