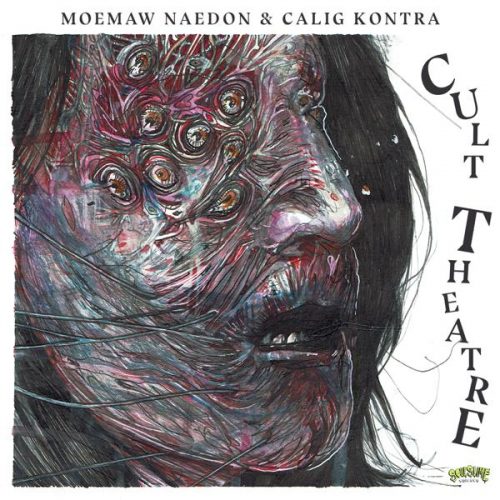 This is a brand new collaborative EP between Pittsburgh emcee Moemaw Naedon & New Orleans’ very own Calig Kontra. The pair have worked together on a couple of songs in the past like “Slime Volcanos” & “Old Times”, but are now joining forces with producer Pyramid Tapes (also hailing from New Orleans) to take their chemistry to the next level on Cult Theatre.

“A New Abyss” is a short yet evil opener as the duo jump on an organ-laced boom bap instrumental to talk their shit just before Lyrikill tags along the psychedelic “Lucid Fragments” to say they’re proud of their environments. Meanwhile on “Witches Sabbath”, the production has an almost industrial feel to it as Lord Goat comes in to help get boisterous before going into more conscious direction on “Magenta Brainwash”.

I think the prophetic lyrics on “Sovereign Sirens” are really great as is the cinematic beat & despite the brevity of “Pass the Vodka”, it does it’s job as an aggressive alcohol-themed banger. The song “Tortured Calculations” tells the story of both MCs pulling up to someone’s show backed by an instrumental while the penultimate track “Altered Beast” is a thunderous proclamation of being living embodiments of syllable evolutions. “Futura Dystopia” is a victorious closer telling everyone to stay late for the sequel.

Now if we really do get a follow-up to this EP at some point down the road, I’d be all for it because I happen to like Cult Theatre quite a bit. Pyramid Tapes whips up some of the best batch of beats he’s ever made & both MCs hit down some pretty provocative lyricism throughout it’s 26 minute run.