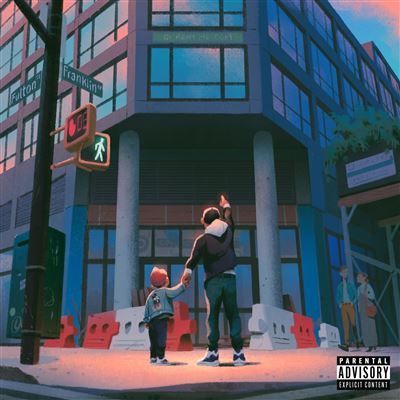 Skyzoo is a 38 year old MC from Brooklyn, New York rising in the underground off the 9th Wonder produced Cloud 9: The 3 Day High. He continued to make a name for himself with a lengthy yet very consistent discography that includes the full-length debut The Salvation, the !llmind produced Live from the Tape Deck, A Dream Deferred, Music for My Friends, the Apollo Brown produced The Easy Truth, In Celebration of Us & my personal favorite: the Pete Rock-produced Retropolitan. Last time we heard from Sky was a year ago with the Father’s Day-themed EP Milestones & knowing his grind, he’s back at it with his 7th album.

“Free Jewelry” starts the album off by sampling Gap Mangione’s “Diana in the Autumn Wind” & lyrics looking back on Sky’s career whereas “St. James Liquor” is a celebratory boom bap banger. Al Skratch of all people appears on the jazzy “A Tour of the Neighborhood”, is which literally a look into the area they grew up in. “Rich Rhetoric” is a intricate breakdown of wealthy backed by a dusty beat while “Bodega Flowers” incorporates some kick-drums & a somewhat funky bass-line accompanying lyrics about appreciation.

Meanwhile on “Something to Believe In”, we get a sample of the iconic Roy Ayers joint “Everybody Loves the Sunshine” along with the concept of being blessed even when Satan is testing him & even though “Humble Brag” speaks for itself conceptually, the vocals in the background are pleasant to the ear. “I Was Supposed to Be a Trap Rapper” takes a look at Skyzoo’s past with JR Swiftz’ production constantly switching from gritty to jazzy while “Plugs & Connections” has rich instrumental & the theme of this is: “ain’t nobody tell nobody what’s to be expected”.

“The Scrimmage” has a hypnotic vocal sample as well as lyrics about minding your limits while we go back to into jazz territory for “Culture-Ish”, which is about passing it down until the baton’s gone. The song “Bed-Stuy’s Burning” speaks on the gentrification of the titular neighborhood accompanied by a live band while the self-produced penultimate track “What Money Taught Us” tells us just that over some keyboards. The album then ends with “Soft Eyes”, which is a glossy romance tune.

It’s always a rejoicing thing whenever this dude drops a project & this is no different from that. Not just because the production has some jazzy undertones to it & some great sample choices, but Skyzoo’s lyricism is at some of it’s most poetic during throughout the whole 56 minutes.