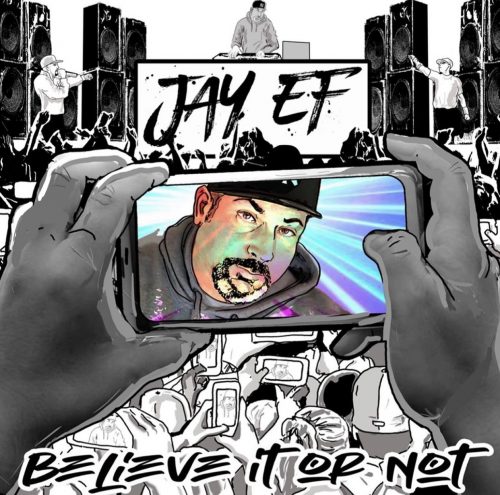 Jay-Ef is a 51 year old DJ from Tenafly, New Jersey notable for being a protege of DJ Rob Swift as well as the co-host of The Leschea Show. But after putting out a handful of stuff from different artists on his Mona Hip Hop record label, the east coast veteran is beginning to build a solo discography from himself by dropping a debut EP with J. Pedina on the boards from start to finish.

After the Rob Swift & DJ Total Eclipse-assisted turntablism intro “Back 2 the Basics”, the title track by Wordsworth encourages the listener to take a look around over a classy boom bap beat before going into jazz rap territory as Torae details what happens when the sun goes down on “Night Time”.

The song “Stages of Asia” by Planet Asia is a piano-tinged mafiosio ballad whereas the string-heavy “Still Friends” by Masta Ace details what friendship means to him. The closer “9 Lives” incorporates some saxophones as Pearl Gates spills out wisdom.

Now if Jay-Ef has plans to put out any more material like this down the road, then sign me up. The guests are well picked out with just about all of them giving fiery performances as J. Pedina’s production predominantly sticks to the traditional hip hop sound we’ve all come to love.

The post Jay-Ef – “Believe It or Not” (EP Review) first appeared on UndergroundHipHopBlog.