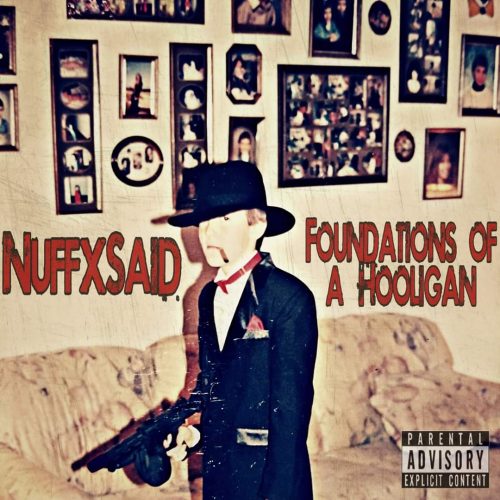 NuffxSaid is an upcoming rapper from Austin, Texas. In 2019, they released their project “Foundations Of A Hooligan.” With this body of work potentially preluding what could become the future of Texas hip hop, will NuffxSaid’s first album be able to prove this?

Through his aggressive delivery and hard-hitting bars, NuffxSaid creates an abrasive experience that showcases his ability to dominate in hardcore hip hop. He immediately shows off his strengths and, for the entire seven-song experience, only expands on these skills. Nuff is relentless, and moments like “F.O.A.H.” and “Out There” show this at its pinnacle. When NuffxSaid isn’t ripping into your skull, he’s taking introspective dives into his own problems. This quality rounds him out as an artist and is highlighted on “OG Triple OG.” Through his thoughtful lyricism, hard-hitting flow, and neat artist skills, NuffxSaid makes an experience that’s Texas should remember.

Behind the boards, there’s a menacing soundtrack that fuses southern hip hop with classic boom-bap. Each song takes a different risk, and it’s part of the reason why each moment feels so unique and immersive. From the guitar on “F.O.A.H.” to the pulsing drums on “B.O.A.T.S.,” each song has a different quality to offer. Through all these well-crafted moments, the one that resonated with me the most was “Gangsta Moves,” which thrives due to its menacing undertone and smashing drums. Overall, the soundscape matches the vibe of NuffxSaid’s vocals masterfully.

In conclusion, “Foundations Of A Hooligan” is a solid debut statement that showcases the potential NuffxSaid has in hip hop. His rapping ability is impressive, and the way he can match his vocals with crazed horrorcore instrumentals is a special skill. Going forward, I’ll be on the lookout for Nuff’s next project as I believe it can be something special.

The post NuffxSaid – “Foundations of a Hooligan” (Album Review) first appeared on UndergroundHipHopBlog.