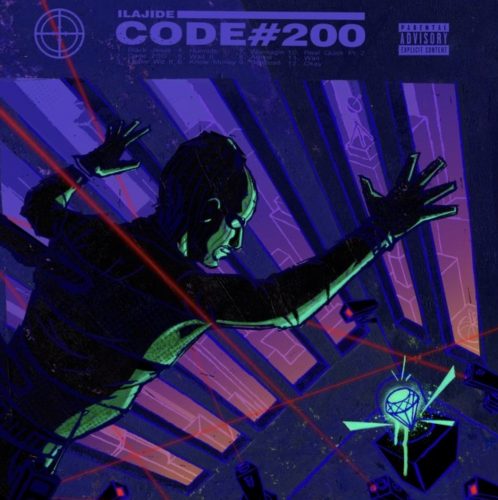 Ilajide is a 30 year old MC/producer from Detroit, Michigan who blew up as part of the Clear Soul Forces. He also has a total of 2 beat tapes, 3 albums & 6 EPs under his belt as a solo artist. But after much anticipation, Ilajide is dropping his 4th full-length outing just a little over a year since the group’s swan song Forceswithyou.

“Black Jesus” is an electronic-tinged opener as Ilajide goes in about that cheese & then the title track talks about robbing motherfuckers over a skittering instrumental. “Leave Wit It, Pt. 2” goes into a more J Dilla-influenced sound as he & Noveliss get together to rap about taking dude’s money & Benzos, but then “Hunnids” with Mic Phelps & L.A.Z. goes in about their wealth over a moody trap beat.

The instrumental on “Wait II” has a alien-like quality to it as Ilajide talks about how he has that bounce whereas “Know Money” recruits Belve for a insightful lesson on the paper & the drums on here just hit you in the chest. Meanwhile, the song “Wunsagin” goes into a more boom bappy direction with some swaggering lyricism & then the Clear Soul Forces make a surprising return on the Def Dee-produced “Arrival”.

The track “Boatload” starts off with a cool mid-tempo vibe, but then it amplifies during the last 2 minutes & the chopper flow doesn’t feel forced at all. “Real Quick, Pt. 2” is of course a sequel to “Do It Real Quick off #414971 that’s lot more jazz-flavored than the predecessor & then “Wait.” gets on his thug thizzle shit over a springy instrumental. And as far the closer goes, “Okay” is a charming way to go out as Ilajide jumps on a cloudy instrumental to spit about running it up.

Of all the solo albums I’ve heard from the cat up to this point, Code #200 has to be the best one yet. He’s definitely cemented himself amongst the greatest producers Detroit has ever seen & this is no exception, but let’s not forget how much his songwriting keeps leveling up.