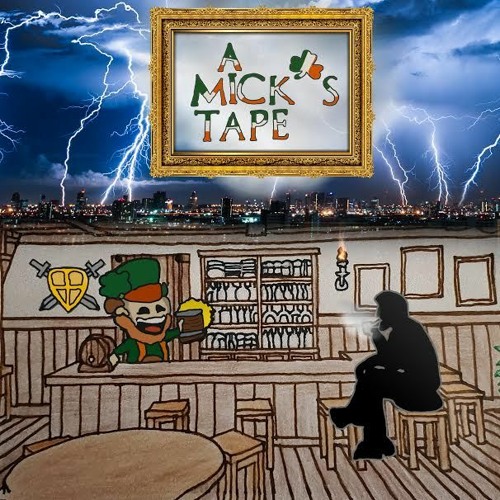 Cat Stockton is an underground MC coming out of Chicago, Illinois. Recently, he just dropped his debut album “A Mick’s Tape”. With a chance at becoming Chiacogo’s next superstar, can Cat Stockton create a classic?

Between the vibrant feel and Stockton’s unique rapping style, this project is definitely like nothing else coming out of the Chicago scene. The intro “Mr. NeighborGOOD” sets the perfect tone by setting up Cat’s life through witty lyricism and hard-hitting punchlines. In addition to his tricky rapping ability, Mick also has a melodic side which proves he can tap into an array of rhythmic pockets. Learning of his Irish background through the project, Cat becomes a distinct character who you will start to feel for and understand where he is at in his life and what’s driving him to success. While these themes and ideas are present, there only really hinted at through what is otherwise a very upbeat performance from Cat Stockton. Cuts that showcase this ability the best art “Old School” and “Charged Up,” which thrive due to their passionate songwriting and deep undertones. Out of all the moments, I found “Moore Smoke” to be the definite standout as we see Cat at his absolute lowest here, speaking in a way that’s both bitter and menacing at the same time. As a whole, Cat Stockton lays out all the intangibles that a great rapper needs.

Behind the boards, there’s an upscale soundtrack that’s raw and integral to Stockton’s ideas. None of these instrumentals break any boundaries, but their simple boom-bap patterns are more than enough to glue the record together. From the classic boom-bap-esc “Mr. NeighborGood” to the climatic strings of “Off ze Record,” each beat captures the pinnacle of what pure hip hop is about. Another touch that makes these loops super memorable is the number of chops and turns in them, which keeps things super exciting and ever-changing. Out of all the well-composed beats, the pinnacle of the production is hands down “Moore Smoke,” which thrives due to its diverse scope, which fuses trap with the boom-bap style the rest of the project contains. Overall, the soundtrack accompanying Cat Stockton adds the perfect backdrop for his unique statement.

In conclusion, A Mick’s Tape is a great entry point into Cat Stockton and what he has to offer. He’s a great MC, and the personality he’s able to build in these six short songs is impressive. Going forward id love to see a full-length effort that takes Stockton to the next level.