Vinnie Paz – “Burn Everything That Bears Your Name” (Album Review) 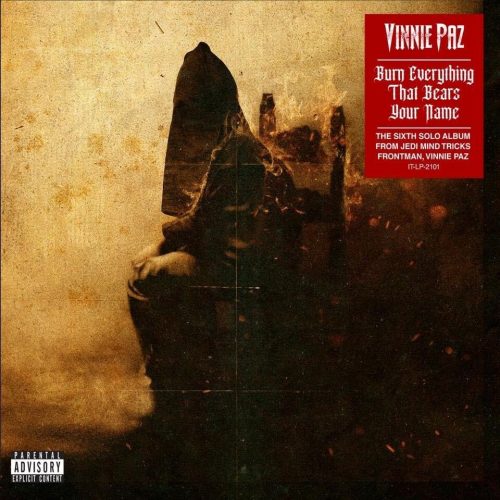 This is the 6th full-length album from Philadelphia underground mainstay Vinnie Paz. Coming up as the MC for Jedi Mind Tricks & the leader of the Army of the Pharaohs collective, he also started building an impressive solo career off his 2010 debut Season of the Assassin & the 2012 sophomore effort God of the Serengeti. His previous album as above so below just came out last Valentine’s Day & a little over a year later, we’re already being treated to Burn Everything That Bears Your Name.

“Socrates Drinking the Hemlock” is a 2-minute opener with Boxcutter Pazzy spitting that disrespectful shit over an old west-sounding instrumental & then Billy Danze joins him for the horn/boom bap infused “Machine Gun Etiquette”, where both of them comparing their lyricism to that of LMGs. “Body Bag Philosopher” brings out the horror vibes from C-Lance’s piano instrumental to Vinnie’s lyrics about a rat going rogue whereas the Stu Bangas-produced “Papi Wardrobe” talks about letting the TEC spray over what I assume to be a 70’s sample.

We then get on some mafioso shit as Ill Bill & Lord Goat hop on the orchestra-laced “Witches Teeth” while the song “Latka Bravas” talks about murder over some trumpets loops. Things go into a more jazzy direction on the Oh No-produced “Danger’s My Business” with lyrics detailing a war going on outside, but then Vinnie details his woman having an abortion on the track “I’m Thinking of Ending Things” & the way Farma Beats flips “Don’t You Ever Dare” by Dean Friedman is immaculate.

“Guilty Remnant Cigarettes” is a short yet effective cut about being out for blood over a more vintage instrumental from Esoteric & right after funny enough, The Czar-Keys cook up what could possibly be the darkest beat on the album as The Verbal Hologram reminds us of being an old school shooter on the song “Don Eladio”. Meanwhile on the overawing “Warhead”, we have Chino XL coming through to help detail how dirty people are before talking about bodies being stacked up on the sepulchral “Excuse All the Blood”.

The song “White on White Crime” kinda has some trap & rock undertones in the production as O.T. the Real & D-Boy Flowski come together with the Pazmanian Devil to talk about how they rap what they live, but D-Boy’s verse at the end doesn’t hit me like the first 2 did. This is followed up with the powerful Islamic ode “Battle of the Camel” featuring Willie the Kid & the sample Giallo Point uses is just so comely.

Vic Grimes takes shit back to boom bap territory on “Torch Bearer”, which I think might be the Paz Man’s response to the diss tracks both King Magnetic & Doap Nixon put out towards him last year. The song “Affairs in Order” incorporates some synths as Jay Royale accompanies the mic to talk about how you don’t wanna be around when the feds start getting on your ass.

Lord Goat returns for “Tell Gold to Hold the Boneyard” alongside Crimeapple to deliver them gangsta bars over a guitar-driven instrumental from Hobgoblin before incorporating an organ & some sputtering drums tor the track “Duppy or Gunman”, where The Sicilian Shooter says anyone who wants it with him is out of their goddamn minds & rightfully so.

“Angels with Dirty Faces” is a gospel-like homage to everyone Vinnie’s family was enamored before he & Eto talk about acting right around them on “Murder Takes Time”. The penultimate track “Lloyds of London” is a bilious acknowledgement of telling when people don’t want the smoke, but the Boob Bronx verse is another low-point for me personally. Finally to round it off, M.A.V. tags along to get in battle rap mode for the flute-backed closer “Digital Veil”.

In comparison to as above so below, I actually happen to prefer Burn Everything That Bears Your Name a bit more. Did it need to be 22 songs? Not necessarily. However, the dude’s pen-game remains unmatched as does his ear for production almost a quarter of a century deep making music.

The post Vinnie Paz – “Burn Everything That Bears Your Name” (Album Review) first appeared on UndergroundHipHopBlog.