The Alchemist – “This Thing of Ours” (EP Review) 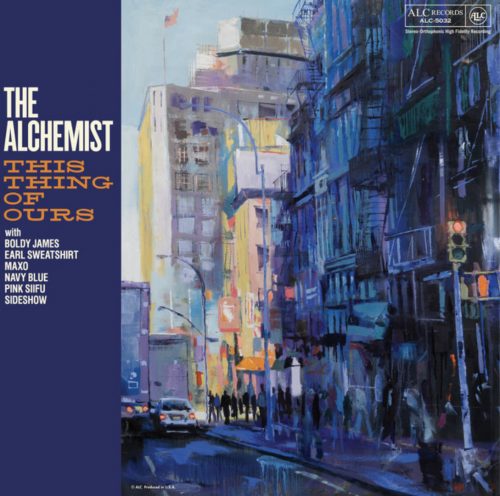 This is the 9th EP from Beverly Hills producer, DJ & emcee The Alchemist. Coming up as 1/2 of The Whooliganz in 1993 with Scott Caan, the disbanded a year later after recording a debut album that eventually got shelved & Scott went onto acting. Mudfoot however, quickly established himself as a household name in hip hop production by working with a handful of the culture’s most iconic names ranging from Mobb Deep to Eminem. Last thing we heard from him solo wise was The Food Villain back in October & after producing the new Armand Hammer album Haram to universal acclaim last month, Uncle Al is staying busy by amassing 6 emcees for This Thing of Ours.

The opener “Nobles” weaves in a Sun Ra sample as Navy Blue & Earl Sweatshirt trade bars back & forth with one another while the next song “TV Dinners” is a bit oxymoronic with it’s calming instrumental along with Boldy James & Sideshow declaring themselves as soldiers through the lyrics. The penultimate track “Holy Hell” by Maxo & Pink Siifu goes on about the devil wanting their souls over a guitar & a vocal sample before Earl returns to talk about people nickel & diming on the trumpet-heavy closer “Loose Change”.

Not the best EP we’ve heard from The Alchemist, but still an enjoyable listen. His production is a lot more chilled out in comparison to Haram & despite a couple of the guest MCs providing weak verses, most of them do what they do best.

The post The Alchemist – “This Thing of Ours” (EP Review) first appeared on UndergroundHipHopBlog.