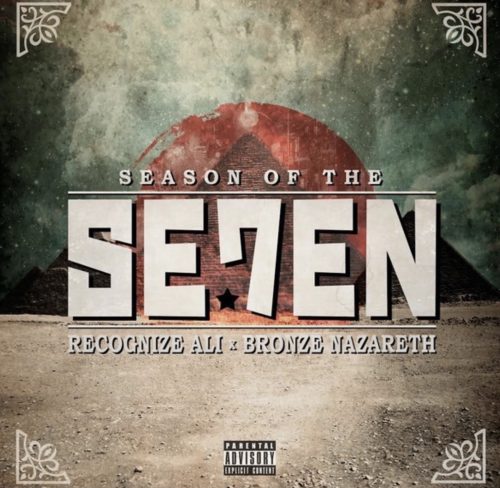 Recognize Ali is a Ghanaian emcee who’s been shaking up the underground for the past several years now off projects like Back 2 Mecca, The Shining, I.S.L.A.M. (I Self Lord And Master) & Guerilla Dynasty. Dude’s previous effort Recognition just dropped back in August & for his 9th full-length outing, Ali has enlisted Bronze Nazareth of the Wu-Elements to produce the whole thing from front to back.

After the “Motown Connection” intro, the first actual song “God Aura” incorporates some horns as Ali spits about the champ being here whereas “Hand Count the Cake” is a dope money ode & the vocal loop was well-picked out. The orchestral-tinged “Tear Drops in the Sky” connects with his Dueling Experts cohort Verbal Kent alongside former Army of the Pharaohs member King Magnetic to rap about catching bodies while “Street Gospel” is a soulful tune about “bringing Terror to your Squad like Big Pun”.

After the “Knew Legends” skit, the song “Silver Spear Promise” seems like a homage to the iconic Jay Electronica joint “Exhibit C” from some of Ali’s rhyme schemes down to the sample of “Cross My Heart” by Billy Stewart while the gospel-tinged “Olympic Gold Medalists” taps in TriState & Willie the Kid to get on the spiritual side of things lyrically.

After the “Find It in Him” skit, the title track has a plinky piano loop throughout with lyrics about greatness whereas “How Many Times” finds Bronze hopping on the mic with Ali as the 2 pondering about a number of things on top of an elegant beat.

“Rivers in the Basement of Truth” taps in Napoleon da Legend & Lord Jessiah to spit the battle bars over a piano & some vocal harmonies while the track “How We Roll” brings in a boom bap beat with some harmonization in the background as Ali spits about being on the corner until the AM. I also like the Money Miz shoutout at the end of the first verse as well.

“Camouflage Dons” is a cool homage to the Wu-Tang Clan & the Killa Beez as Ali jumps on an instrumental that has the Wu sound alongside Dom Pachino & before the “Outro to Detroit” outro that finishes off the album, “The Grind” is a symphonic coda about his hustle.

In my opinion, this is one of the best albums that Recognize Ali has ever done. Dude continues to further demonstrate as to why he’s one of the most thought-provoking MCs to emerge from the underground in recent years & Bronze Nazareth comes correct on the production per usual.