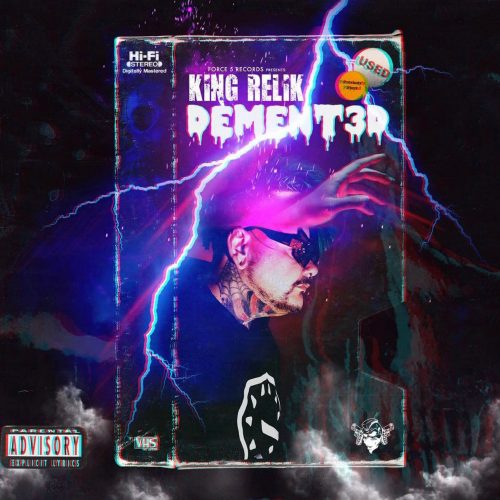 King Relik is a 38 year old MC from Long Beach, California emerging on Valentine’s Day 2017 off his debut EP 12:45 produced entirely by Klepto K. However, he ended up signing to Wisconsin-based underground label Force 5 Records last February & is finally delivering his full-length debut just in time for 4/20.

The opener “Vilynz” connects with Skribbal & Radek to declare themselves as bad guys on top of an organ-laced beat whereas the next song “Sl33p” goes into a more electronic direction as Relik talks about being an insomniac. “Syko” reads as a 1-minute bipolar episode on wax as the overall sound of it keeps jumping all over the place, but then “Yogurl (Rollyaeyez)” goes into detail about this hoe over a minimal instrumental.

The song “Nayzay” dives into a more glitchy, industrial-sounding as he spits that wicked shit while “Grynd” is a chaotic punk rock anthem that I’m sure will get the pits going. The song “P.O.S. (Piece Of Shit)” talks about working on himself over an organ & some hi-hats, but then “Read the Note” is a spectrally-produced storytelling joint about Relik pulling off a robbery.

The track “Spacevan” dives into a more piano-boom bap direction with lyrics about hotboxing whereas “Pimpin’” is a more ill-lit vibe in the production as Relik & Lima Beans paint themselves as actual pimps. The penultimate song “Rabidbaboon” incorporates some synth-horns with lyrics about how wild dude is & then the album ends with “Handles”, which feels like a 1-minute homage to bands like Green Day & blink-182.

Been curious to hear how King Relik would sound on his own & I think DEMENT3D is actually a pretty solid album. It’s cool to hear the wide rage of sounds that the producers bring to the table & the guy has never sounded better lyrically.