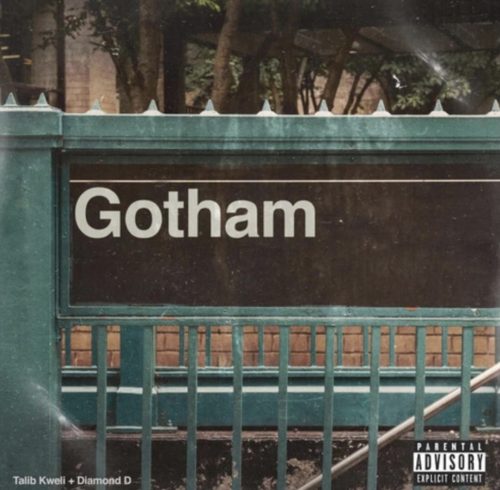 Gotham is an MC/producer duo from New York consisting of Talib Kweli & Diamond D. The latter being a founding member of the seminal collective D.I.T.C. & was one of the first to co-sign Kweli back when he originally formed Black Star alongside childhood friend Yasiin Bey. The first time we really heard Gotham together was on “Where’s the Love?” off of Diamond D’s 2014 solo album The Diam Piece & then they got back for “The Zone Out” on the follow-up The Diam Piece 2 back in 2019 but ever since then, they’ve been hard at work on their full-length debut as a duo & I’m very excited to hear the results.

“Sons of Gotham” kicks the album off with a misty boom bap beat along with lyrics calling out “rappers acting like Kanye” whereas the next song “Olympic” incorporates an organ & a guitar as Kweli proclaims that they do this rap shit for sport. “The Quiet One” touches down on being the voice of the people accompanied by an eerie instrumental & an animalistic Busta Rhymes verse while “On Mamas” goes into a more synth-heavy direction with Kweli spitting about getting the speakers pumping. Meanwhile, the song “Attention Span” is a more atmospheric cut addressing those who’re out to lunch & the Skyzoo verse hits the nail on the head.

The track “In Due Time” is a fiery anthem about how you’ll be getting yours eventually on top of a classy boom bap instrumental whereas John Forté of all people comes into the fold to take a jab at the system on the minimally-produced “Pick Ya Head Up”. The song “Chillin’ While Black” is the one of the only 2 on the entire thing where Diamond D himself jumps on to spit as he & Kweli talk about racial profiling over a horn-inflicted beat & even though the penultimate track “I’ll Tell Ya Later” has a cool concept, the skeletal beat is underwhelming & the Niko Is feature is kinda weak. The album does end strong though, as Kweli & D hop on a dusty instrumental with some jazzy undertones to talk about holding it down.

Despite the fact that Talib’s recent output has been hit or miss with me admittedly, Gotham knocked it out of the park on this one. He & Diamond D do a damn-near perfect job at paying homage to their home-state as the lyrics & production both take listeners back to the traditional days.