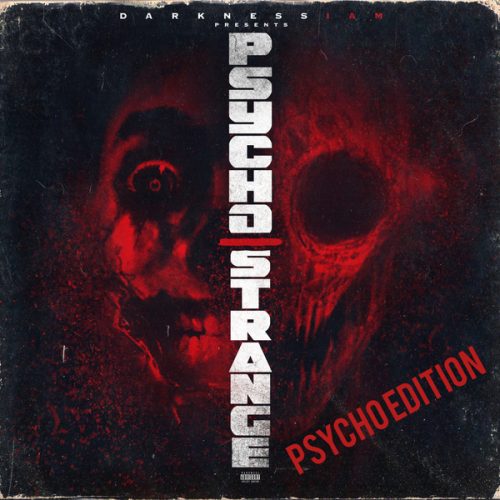 Darkness I Am has dropped a new project titled “Psycho/Strange”. It is a two part album, side A or Psycho Addition has twelve songs while side B Strange Addition has eleven totaling out to 23 tracks. Darkness I Am is originally from St. Paul, Minneapolis, hence his east coast idols/influences such as Onyx, KRS-One, Tech N9ne, Insane Clown Posse Gucci Mane, and Young Jeezy. These influences can definitely be heard throughout these two albums with Darkness’s hard hitting delivery and aggressive tone throughout.

The dual album is promptly split into two sections where one deals with a massive amount of internal conflict, while the other deals with the external. Songs such as Demons delve into the conflicts of the mind that one must overcome in order to function properly and succeed in life. Misery and Obsession lament over aspects of life that are unchangeable. The next track after these is Damaged where Darkness recounts his troubled youth and how that’s changed him as a man today.

The second half of “Psycho / Strange” is full of life and upbeat tempos. The high energy juxtaposed against the first dejected half is a nice transition to go through emotionally. The Strange Addition side proves Darkness I Am’s passion and rage that is released in 45 minutes alongside some lyrically driven features. His emotional presence on the second half is much more present and demanding of the listener’s attention. Darkness I am takes on the world on this second half going in on other MC’s and mastering his hardcore persona. “Psycho / Strange” is available on all streaming platforms now.

The post Darkness I Am – “Psycho / Strange” (Album Review) first appeared on UndergroundHipHopBlog.