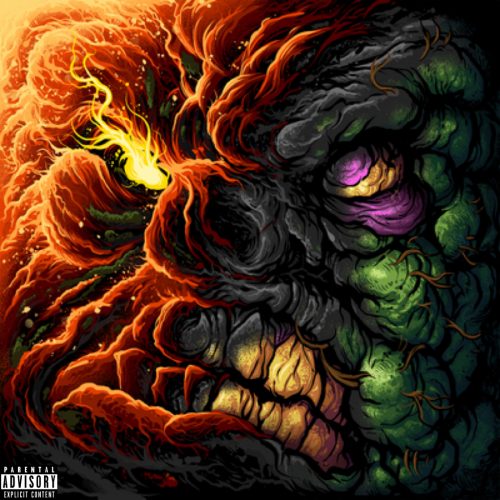 Alla Xul Elu is an Ohio-based horrorcore trio consisting of Billy Obey, Joey Black & Lee Carver. Originally breaking out in 2015 as a duo, Billy & Joe started out by releasing their first 2 albums Head of Horns & Sci-Co that same year. This was followed up with their 4/20-themed debut EP Necronomichron in 2017 & adding Carver into the fold shortly after. But it wasn’t until Twiztid signed them to Majik Ninja Entertainment in 2018 when the Xul Boys’ music got increasingly better. Their MNE debut The Almighty is unquestionably the greatest horrorcore album of the 2010s, their 2019 sophomore EP Church of Xul took a much darker approach & the trio’s previous album Mauxuleum made it in the top 10 of my Best Releases of 2020 list despite them ditching their signature boom bap sound for a more industrial, trap metal direction. But to celebrate the 4 year anniversary of the original Necronomichron, it’s only right for A.X.E. to celebrate by dropping their 5th full-length album as a sequel.

After the “Taking a Trip” intro, the first song “An Ominous Shack” has an unhinged boom bap beat as the trio detail a fucked up vacation & then “Down in the Dark” goes into a more industrial direction with lyrics about making plans with Mary Jane. The song “Deja Vu” is a grimy sequel to the title track of the first Necronomichron while “Fire It Up” dives into a trap metal sound about lighting up the weed.

“Smoke” is a chaotic anthem about not wanting their high to be blown & then “Dead by Bong” feels more like an interlude as the lyrics are very repetitive despite the electronic-influenced production. The song “Alternate Dimension” is a dusty sequel to “Another Dimension” with a stellar Blaze Ya Dead Homie verse while “Within the Trees” is a gruesome horrorcore cut detailing forest monsters.

After the “Necronomicream” skit, the track “Munchiez” is a sinister depiction about how they handle being hungry when stoned while “Pass Away” contains some ominous organ harmonies as they talk about staying High & avoiding daylight. The album finishes off with “Kandarian Dabber”, where the A.X.E. deliver a wicked anthem to dabbin’.

Necronomichron is one of my favorite projects that Xul has ever put out, but this is a rare instance where I prefer the sequel over the predecessor. It’s great to hear the trio returning to the very sound that they become known for & the marijuana-themed lyrics have evolved tremendously.